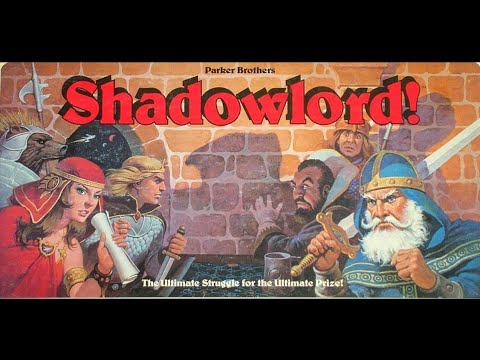 A review on how to play the board game ShadowLord.

The Object
To become Master of the Universe by defeating your opponents before the timer declares the Shadowlord has won.
Each player assumes the identity of one of the Masters of Earth, Air, Fire or Water. Starting with two allies, you’ll travel through the galaxies of the Universe in search of Warriors, Merchants, and Diplomats – and the Power cards and space ships that make them powerful. Powerful enough to defeat opposing alliances in exciting and suspenseful duels. Strong enough to withstand attacks from the mysterious Shadows. Mighty enough to challenge the Shadowlord for the Power Stone that gives its owner greatness in battle.
The secret to survival is accumulation of power, sabotage of opponents’ alliances, and the strategic use of your characters, each of whom has a special job to do.
So prepare for an extraordinary adventure among planets, galaxies, and the eerie Lost Fortress. Where promises are as lasting as the next tempting bribe. Where space storms appear at the roll of the dice. When battles can be fierce and defeat forever. Where time runs down toward the ultimate question … Who will rule the Universe as Master of all? Subscribe to keep up with all the latest reviews and game hunts! #boardgame #ads #ads

Longplay of Malice, played as the NTSC version on the Xbox. This game's version was released on June 2nd, 2004. Please give the video...