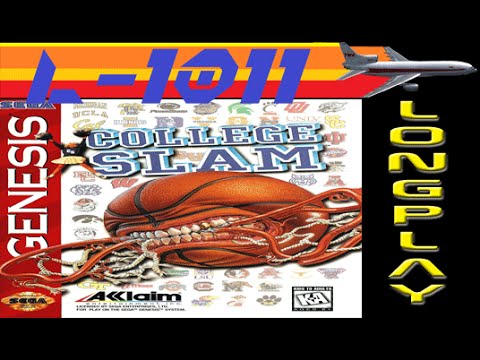 A completed Longplay of this sequel to NBA Jam, playing an entire season and then the tournie as the Michigan Wolverines.

Neutral: Some new commentary (‘From off-campus!’ for 3-pointers) but favorites like ‘boom-shakalaka’ are left out. Players on teams are simply named by position, and some teams have two players with the same position. Season mode is random, and not conference-biased.

Cons: No real game-play updates aside from new powerups. Fewer player models, some animations are weaker, music is overall less interesting. Player ratings do not seem to reflect contemporary (1995-96) team performance – Duke and Arkansas are two of the worst teams for instance. Some notable colleges like Tennessee and Notre Dame are missing. Single-game single player mode does not allow picking of CPU opponent.

College Slam is a 1996 console-exclusive ‘arcade-style’ basketball game developed by Iguana UK and published by Acclaim. Based on the blockbuster NBA Jam, major innovations included a true season mode and (16-team) tournament, as well as the ability to rename all players and customize their ratings. Released late in the Sega Genesis and Super Nintendo lifecycle, and without a corresponding arcade release, the game was quickly overshadowed by Midway’s NBA Hangtime and later NBA Showtime in the ‘arcade-style’ basketball genre.

Due to NCAA regulations about using the likeness of college athletes, the players were simply named by position and thus mostly unrecognizable. However in this case, I do name the Wolverines I play as, and modify their ratings a bit.