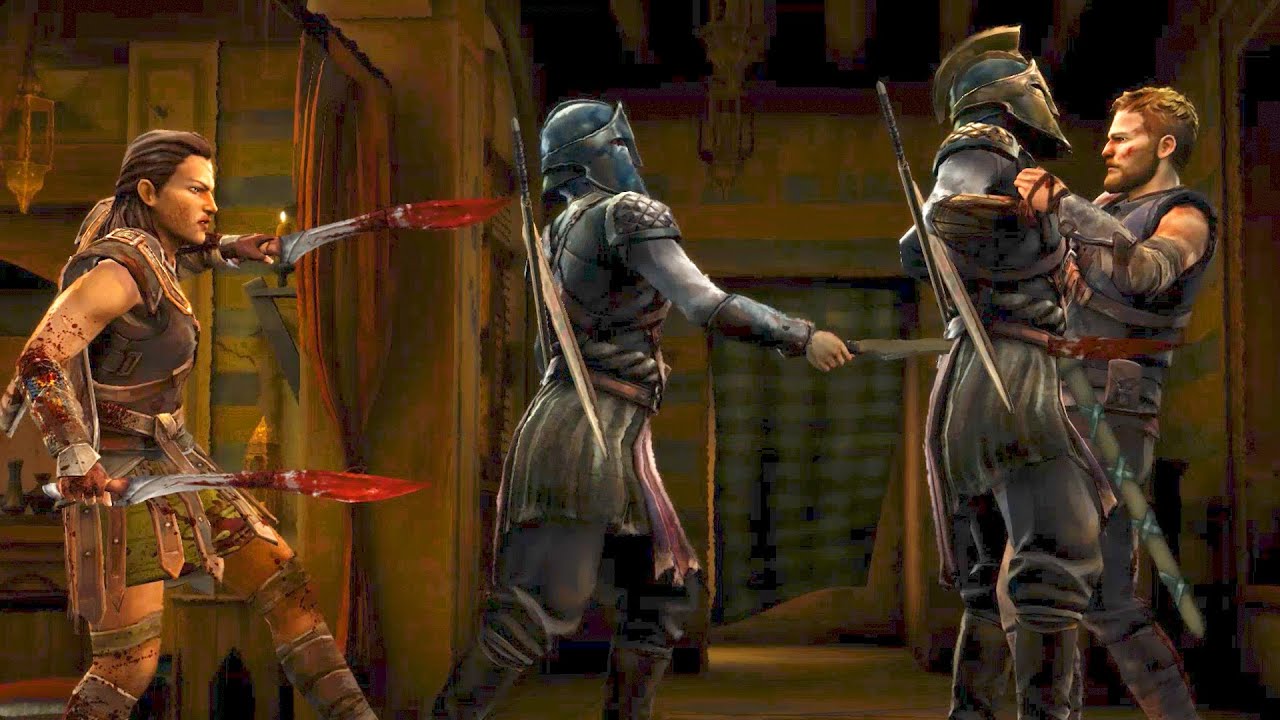 I decided to put “all pieces together”. 🙂 In GoT, as many of you know, you always jump from one character to another. But I decided to put all the events for each character together and to view it from the beginning till the end. I was interested what it will look like, and I’m generally quite satisfied with the result. And I think it may be interesting even for those who already completed the game.

The episode begins in Yunkai, three days after its liberation by Daenerys Targaryen. We are introduced to Asher Forrester who is pissing at the alley. Once done, he enters the tavern where he is greeted by his mercenary friend Beskha. The tavern has been abandoned ever since the liberation and the two mercenaries spend their time drinking. The two mercenaries have captured one of the masters who tried to escape Yunkai, the man is Bezzaq, who is worth 800 dragons. As they discuss what they can do with the money, Asher thought about his family who he haven’t seen for many years. Despite his father exiling him, he still thought about Gywn Whitehill and his siblings.

Their drinking was interrupted when the Lost Legion soldier barged in. They are led by Tazal whom Asher and Beskha have run into in the past. The two went to greet Tazal who demanded to know where Bezzaq is. After either willingly or unwillingly given up the man, they are given a chest of 400 dragons, which is half of what was promised. Conflict immediately started when Tazal killed Bezzaq and announce his intention of blaming Asher and Beskha and claiming the reward.

The two mercenaries fought against the Lost Legion soldiers and despite being outnumbered, Asher and Beskha proved themselves to be skilled fighters. The fight ends with all of the soldiers dying and Tazal is heavily wounded. Asher is given the choice of killing him or break his leg. More Lost Legion soldiers barged in, enraged at Tazal’s death or condition, they immediately overpowered Asher and was about to get killed before he was then saved by Malcom Branfield.

Asher’s surprise and questioning was put on halt when more Lost Legion soldier approached. The small group make their exit. Once outside, Asher ask Malcom why he was in Yunkai. His uncle told his nephew that he was glad to see him and began to explain why he is in Yunkai.